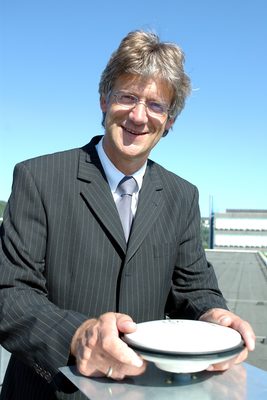 After introducing ZESS (Center for Sensorsystems) highlighting the methodological research areas and presenting some application examples, putting a focus on remote sensing and bistatic SAR, the lecture will propose a candidate for a unifying theory to sensing, sensor signal processing and high level information extraction in form of a combination of Compressed Sensing and Bayesian estimation.

After a short introduction of some basics of Compressed Sensing, the lecture will concentrate on the potential of the nullspace – doing l1 minimization in the nullspace of the sensing matrix. It will present a Kalman filter based approach to the solution of this minimization problem and by comparison with other classical reconstruction algorithms, demonstrate the feasibility and efficiency of the approach. As an application example the lecture will shortly present some results of Inverse SAR Imaging utilizing only a small percentage of the available raw data. Subsequently the scope will be widened to the general case of mono – or bistatic SAR imaging, highlighting the “curse of exploding dimensionality” and point out strategies to overcome these problems. Finally some conclusions will be given.

In 1999, Prof. Dr. Loffeld became Principal Investigator (PI) on Baseline Estimation for the X-Band part of the Shuttle Radar Topography Mission (SRTM), to which ZESS contributed to DLR’s baseline calibration algorithms. He is a PI for interferometric techniques in the German TerraSAR-X mission, anda PI for a bistatic spaceborne airborne experiment, where TerraSAR-X serves as the bistatic illuminator while FGAN’s PAMIR system mounted on a Transall airplane is used as a bistatic receiver.

In 2002, he founded the International Postgraduate Program (IPP) “Multi Sensorics,” and in 2008 established the “NRW Research School on Multi Modal Sensor Systems for Environmental Exploration and Safety (MOSES)” at the University of Siegen.