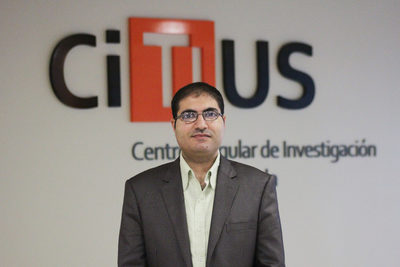 This thesis presents a research work for the effective visualization of different types of Geodata. The visualization is carried out with the use of a GIS (such as GoogleEarth), and a case study has been implemented:

Visualization of archaeological data from excavations of a castle located in Galicia, O Castelo de A Rocha Forte, which have allowed the visualization and analysis of georeferenced archaeological information. This implementation has been called Virtual Geographic Environment System (ArVS) and proved to be very efficient, as it can handle different types of 1, 2 or 3 dimensional data, such as text, artefacts and 3D reconstruction of historical elements. In addition, the system has proved useful as it provides access to the excavation database in real time and efficiently updates the visualization of the excavation.

Visualization in the system involves the use of new visualization paradigms that could treat data and represent objects in the same or very similar geographic position. The system provides enhanced multilayer visualization that avoids overlapping and a dialogue interface to filter the data to be visualized, which reduces the time to obtain the information from the database, which is reflected in the improved performance of the suggested system, and the ability to adjust the precision of the data to fit a specific Level of Detail (LOD). In addition, the system integrates the use of new Human-Machine Interaction (HCI) techniques that allow maps and objects to be treated through interaction for more natural navigation; navigation using gestures and voice control. This allows the system to help end users and archaeologists to explore excavation data and analysis in a safe and practical way with new visualization and navigation methods.